The focus of this essay is on green roofs, which bring multiple benefits to structures, despite a few drawbacks that exist. Green roofs are roofs of building which are covered with vegetation and planted over a waterproof membrane.  Green roofs can lead to many positive outcomes and are installed for several purposes; they absorb rainwater and lower the amount of storm runoff, provide insulation which results in a reduced need for air conditioning, lower urban temperatures which diminishes the heat island effect, and create habit for wildlife. Stormwater is a huge factor which is pushing cities towards supporting green roofs.  Green roofs slow the movement of water from rainfall, to storm sewers, thus prevent sewer systems from overflowing.  Many cities find stormwater to be a colossal challenge with trillions of gallons of untreated stormwater coming off of parking lots, streets, and roofs of the city and then emerging into connecting bodies of water, such as; lakes, rivers, and canals. Green roofs and other green infrastructures are being utilized by many cities, such as Chicago, for possible solutions to this storm water issue. 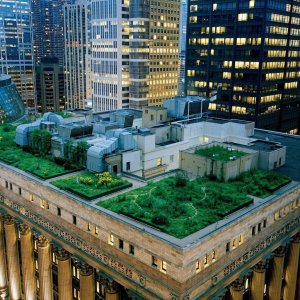 The only significant disadvantage to installing a green roof is the initial cost of the waterproofing system, building structure, and root barriers which need to be installed to have a green roof; these costs do, however, eventually pay themselves for themselves because of the savings from reduction of air-conditioning use.  The building structure must be able to support and be sufficient enough to hold the additional weight of the green roof.  Normally the roof must be adequate for an additional 15-25 pounds per square foot to hold up a green roof.  If the roof needs to be re-roofed in order to install a green roof, it normally will be a very costly project.  This tends to scare people off in putting in a green roof because of the initial large cost that comes with the installation.

Along with the environmental benefits stated above, green roofs have the capability of having economical and social benefits for urban environments.  Economically, green roofs are beneficial because they have the ability to create more jobs that last. Green roofs are very labor intensive which requires heavy and consistent maintenance, therefore creating a potentially long-lasting job.  Also, these rooftops are a great way for cities to grow food; in return, this provides additional jobs, from the planning and maintaining of the garden to harvesting, processing, selling, and distributing of the product, each action can provide a long lasting job. Social benefits are also recognized as an advantage for green roofs.  Many hospitals are building green roofs to administer patients the opportunity of healing through horticulture therapy as well as helping staff relieve stress.  Commercial buildings are also installing green roofs as an extra amenity which attracts many residents.

The previous mayor of Chicago, Mayor Daley, was seen as an environmental innovator (Rosenburg, 2012). On top of City Hall, he had the roof painted white and had a garden planted. The surface temperature decreased from 169 degrees to a varying degree of 91 and 119; this is a minimum of 50 degrees difference.  Chicago’s City Hall was one of the earliest and, now, most well known examples of green roofs in the United States. Since the installation of this green roofs, Chicago has begun to implement codes which offer incentives to builders who put green roofs on their buildings.  Chicago is now currently the leader in green roofs for the U.S., last year adding 600,000 square feet of green roofs.  The city now has approximately 600 projects concluded and in the works, combined, that will bring its total to seven million square feet. (Stutz,2010)

In the suburbs of Chicago, possibly the most well known green roof is located in the Chicago Botanic Gardens.  The green roof garden is part of the Daniel F. and Ada L. Rice Plant Conservation Science Center (http://www.chicagobotanic.org/research/building/). The green roof is the feature of the science center where the combining of practical benefits and aesthetic appeal provides an opportunity for research and education.  This garden is a living laboratory and serves as an outdoor classroom for thousands of visitors annually.  The garden is 16,000 square feet and accessible to the public.  There are educational panels displayed which inform visitors about the different aspects of the rooftop gardens. 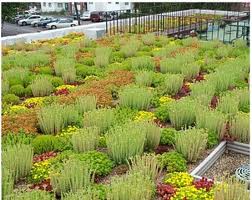 There are two distinct areas in this rooftop garden which have specific functions.   The Josephine P. and John J. Louis Foundation Green Roof Garden North has a mix of plants known as good green roof plants, plus exotic and native plants that have possible use for green roofs.  The Ellis Goodman Family Foundation Green Roof Garden South features national and regional plants, many of which are not generally used as rooftop plants.  Between the two gardens, there are approximately 40,000 plants (200 different species) which are currently under evaluation and tests within three different soil levels.  The plants are tested in different soils which are characterized by their grain size, density, and PH levels; the reason for this is to see which plants grow best in which environment.  All of these plants are being tested to see which have the most effect in semi-intensive roof garden environment.  Semi-intensive roof gardens are characterized by grasses, small shrubs, and small herbaceous plants which only require occasional irrigation and moderate maintenance.  The growing depth is normally between 6-12 inches and is a system which is able to retain stormwater.  Semi-intensive green roofs also provide the potential for a “normal” looking garden, but on a roof.  The gardens have equipment to monitor wind and light levels, soil moisture, and temperatures in the various layers of the plantings.  The scientists monitor the plant’s health, aesthetics, and survivorship.  The scientists then report which plants absorb water and nutrients from rainfall (lessening runoff into storm sewers), and which cool the building below and lessens energy use from air conditioning use. Plants will then be promoted to the green roof industry locally and nationally to ensure that the appropriate plants are used in specific environments.

Green roofs have a very large impact on environmental and economic sustainability, as is already being seen in the city of Chicago. Green roofs have proven to reduce the amount of water runoff, provide insulation, lower urban air temperatures, create jobs, and be an educational space for youth and adults to learn about sustainable options when it comes to their produce.